What is a Platform Engineer?

I've been called many things over my career, most of them polite - more recently the work to build CI/CD pipelines has been termed "Platform Engineer" or "Platform Engineering". The risk of such a title is that you get typecast into the role of an engineer who develops platforms for use by Developers and doesn't necessarily include any of the Ops bit of DevOps.

In my experience, however, the roles have involved a great deal of Operations Discipline work such as designing Major Incident Management Processes, Alerting, and Monitoring solutions.

In the role it "feels" like it has a lot in common with Site Reliability Engineering, in that both roles are engineering roles somehow set apart from software engineering they seem to have a similar Google Trends Pattern though: 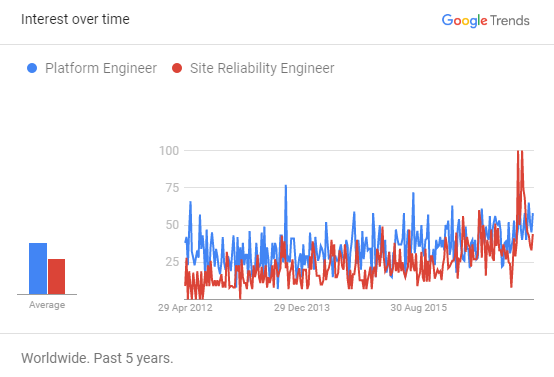 Is there a canonical definition of a Platform Engineer or is it like SRE simply an implementation of a DevOps capability within an organisation?

I think you would be hard pressed to get a straight definite definition of a Platform Engineer.

Where I'm currently positioned everyone on the team starts out with their own special role but very quickly the end-game seems to be to feel comfortable enough to be called, or to call ones self, a platform engineer.

When I was first told that officially a platform engineer the brief explanation of what that meant, for me at least, was that I was going to need to do a whole lot more defending of my platform.

I wasn't quite so focused on helping our developers directly (although that's still the goal obviously) but as the platform owners our jobs was mostly to make sure that our developers where being good citizens by making sure we designed the platform so that we could show them what they did wrong if something happened and we could give them all the information they needed to fix their code.

The obvious implication of this is that our platform is perfect, which it obviously isn't. But at least we can support the developers in a way that gets them working on a solution on their end while we're fixing up our side of the agreement.

Source: I'm a Platform Engineer, (though not in a strict DevOps sense).

I manage Office 365 for my employer. Particularly the Identity, Authentication, Messaging portions. I don't build Exchange servers (under normal circumstances) but I do manage all changes in the service and "own" the platform.

As hvindin's answer also calls out, I am equally responsible for evangelizing the platform I own as well as maintaining it.

49
What is Serverless?
58
What is the difference between Sysadmin and DevOps Engineer?
34
Why shouldn't I try to hire a 'DevOps Engineer'?
8
What is Systems Thinking?
13
What is the difference between DevOps engineer Vs DevOps consultant Vs DevOps architect?
10
What is Titus and what issues does it solve?
0
What is warm(ing) up?
3
What is DataOps?