Are there any benefits to mirroring our git repos outside of Azure devops for a small (~7) team of developers who all work in the same office?

I'm a developer who also wears the "DevOps" hat when he has time to do so (all the time right now). We're looking at potentially moving from our self hosted and maintained instance of Gitlab to MS Azure DevOps. My manager has stated he's interested in keeping a "forest of git nodes" for a couple different reasons.

I think it's easy to tell what MY opinion of us doing this is, but I'd like others input on pros vs cons of going about structuring our git repo's in a way like stated above. From what I can tell he's thinking about the repo structure in one of the two ways shown below: 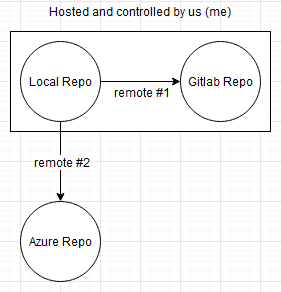 My reasoning for wanting to not bother with the mirrored repo's are the following:

With all of the above being said, I'm still open to having my mind changed. I'm new-ish to the development field and am very aware that I could be missing something crucial on why we would need a mirror or multiple remotes.

As you have realised Git is decentralised by design.

If Azure DevOps goes down, or your office internet connection, you can still use LAN repos. These could be simple file shares. You can also use emails to share commits; nothing I've tried but Git has native support for it). I have however pushed and pulled commits directly from and to my colleagues computers using file shares (because our online Git provider back then was extremely bad and slow (and the repos were many GB).

If you don't have automatic sync (which you can setup using pipelines/CI) between Azure DevOps and GitLab then the most up-to-date repos will reside on the developers computers which makes it easy to push the repo to a new location when needed (simply add the new remote and click push). However, if some repo hasn't been used in a long time it'll probably not exist on any developers computer and you'll therefor not be able to access it.

The maintenance costs of having Azure DevOps Server as a backup for a small team shouldn't be much different than having GitLab as backup.

I'm not recommending these solutions, rather I'm just discussing them.

You might want to have a look at the Azure DevOps Proxy Server.

Not the answer you're looking for? Browse other questions tagged git azure-devops gitlab distributed-systems or ask your own question.

3
How to push to other origins using Azure Pipelines?

2
Git Files Encryption for Business
1
How trigger a build by a commit in a branch prefix?
1
Gitflow with pull request or pull request
8
Multi-language Monorepo
1
How to automate installing an ISO in a VM?
1
exponential backoff for git pushes?
3
How to push to other origins using Azure Pipelines?
4
Is it possible to view all changes made on a Git feature branch in Azure Devops?
1
Azure DevOps issue with GIT, Visual Studio and Azure (Umbraco)
1
Deployment Error: getaddrinfo ENOTFOUND <appServiceName>.scm.<appServiceEnvironment>.appserviceenvironment.net