Currently we have a build pipeline which checks if there is a PR for the current branch and if yes it sets a variable and skips the other build steps.

But when this happens the Release still completes as Successful and a empty drop is created. This triggers a release which fails because drop is empty.

This is the dumbed down version of the build pipeline:

What should be the correct way to skip a build and not trigger a Release? Is it possible to just disable the creation of an empty drop?

I tried to disable the creation of an empty drop, but all my search results are just people where there was no drop created on mistake.. so this was a dead-end.

I also know I can just fail my build pipeline but this would show up in the stats. As far as I can tell there really only is Success and Fail as a status for a pipeline. So this solution is also not working out for me.

Try and add a Stage condition to only run that stage for a specific branch.

PS : Will refine the answer in future, currently we are still using GUI for releases and we are using this branch filter to control this scenario. 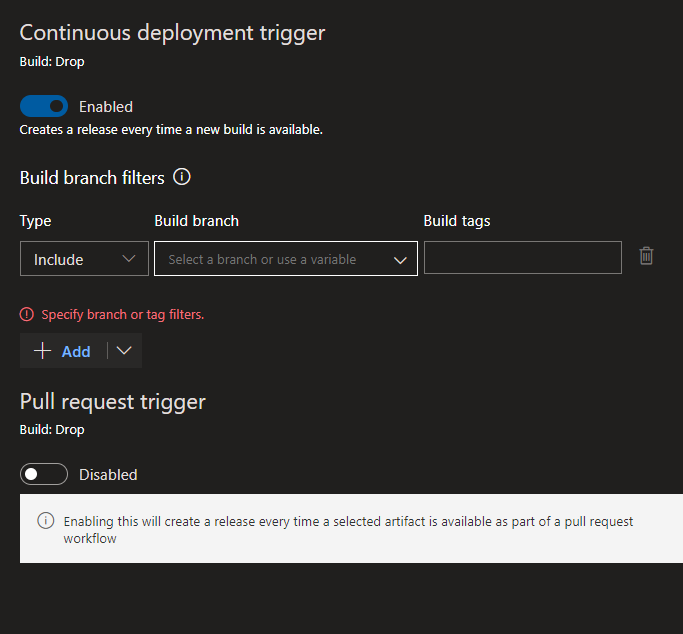 Not the answer you're looking for? Browse other questions tagged azure-devops azure azure-pipelines build-pipeline or ask your own question.

1
How to setup multiple build environments in Azure DevOps/TFS2018?
0
Microsoft DevOps: build triggering vs release
1
How trigger a build by a commit in a branch prefix?
2
How do I get Azure Release Pipelines to move a .jar from a Build Pipeline job and place it on a Linux VM?
3
How to arrange builds for staging and production with Azure DevOps?
2
How to deploy Dev Azure SQL code to Prod Azure SQL using dacpac without knowing the target server credentials
5
How to properly setup a multi-environment release pipeline in Azure YAML pipelines?
1
Azure DevOps: How to pass a parameter from a build to a release?
1
Azure DevOps build pipeline error on copy in post build event