What exactly is the cloud term 'a Firehose'?

I found a Firehose definition from Overview of the Loggregator System Cloud Foundry docs.

The Firehose is a WebSocket endpoint that streams all the event data coming from a Cloud Foundry deployment. The data stream includes logs, HTTP events and container metrics from all applications, and metrics from all Cloud Foundry system components. Logs from system components such as Cloud Controller are not included in the firehose and are typically accessed through rsyslog configuration.

Because the data coming from the Firehose may contain sensitive information, such as customer information in the application logs, only users with the correct permissions can access the Firehose.

Where does this term have it's roots and why it's called that way? Is the concept the same for other Cloud offerings and platforms?

It's funny when I translate this term to my native language.

The fire hose is a reference to an old Weird Al Yankovick movie, UHF (1989). In this movie, George Newman (portrayed by Yankovick) starts a local TV channel in the UHF band and is responsible for programming on the channel. After befriending the Station's Janitor, Stanley Spadowski, (portrayed by Michael Richards) George gives the Janitor a slot to run a show of his own making. The show, entitled "Stanley Spadowski's clubhouse" becomes an overnight sensation due to Spadowski's zany antics.

During a gameshow segment on the show, (video) Spadowski announces that a little boy, Joel Miller has "won" a contest by finding a marble in a wading pool of oatmeal and "gets to drink from the firehose!" - and this seems to be the likely origin of the term. 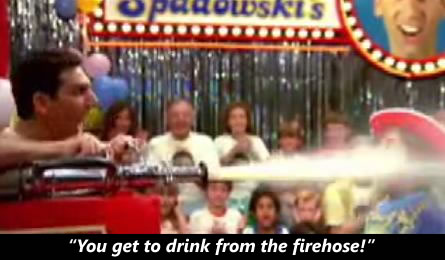 An oft-repeated sentiment in IT is that trying to comprehend a vast amount of material in a short amount of time (such as is the case when starting a new job, taking a training course or seminar on a technological subject or learning about a new product or device) is like "attempting to drink from a firehose" - it is nearly impossible to consume the entirety of such a large volume of information that is directed at you with such a rapid flow - a direct reference to the above scene.

It appears that in an attempt at humor, Cloudfoundry has chosen to call their Websocket "The Firehose" because websockets are used to "stream all application event data" (which they apparently regard as voluminous) most likely in reference to this sentiment/saying and scene.

Not the answer you're looking for? Browse other questions tagged monitoring metrics logging or ask your own question.

6
What are benefits of using third party app metrics tools versus custom build tools?
27
What are some methods to measure the ROI for DevOps?
8
What is the proper relationship between rollback/rollforward and MTTR metrics?
1
What is the proper term for lead time from commit to deployment?
1
What are the best logging/metrics reporting tools for use with OpenShift?
1
What is the advantage of using Prometheus over ingesting metrics using logs?
1
Are there cheaper alternatives to cloud watch logs for creating dash boards?
0
What is the best way to monitor job status?