How to configure Docker tooling on Eclipse?

The Eclipse plugin "Docker tooling" seems to expect the installation of Docker Machine, or a network connection.

But, on Windows 10 things seem different from what this plugin expects so I can't browse for the required executables. Also, how could I find out the local network URL? docker info does not reveal this. 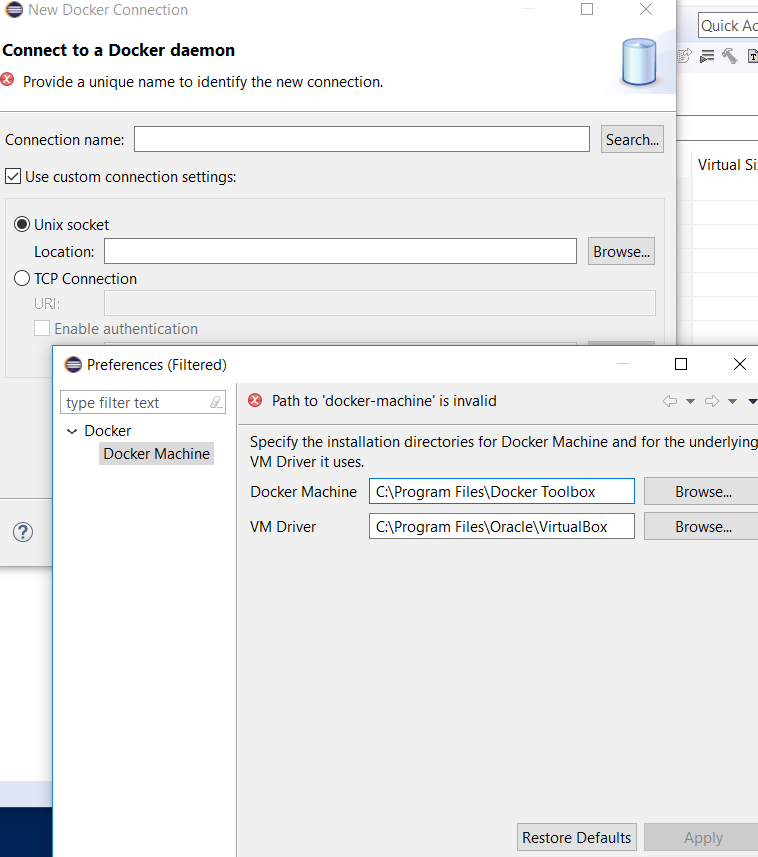 This is the value you need to put in the Docker Machine field. You don't need to change anything for the VM Driver field as VirtualBox doesn't need to be installed when you use Docker for Windows.

Then you have to edit some setting of the Docker daemon to allow your Eclipse Docker plugin to connect to it:

You can now edit your Docker Connection in Eclipse and do not need to search for a connection name, simply enter how you want to name it (ie. SomeDockerConnection) and check the "TCP Connection" radio button.

You can enter tcp://localhost:2375 in the URI and click "Test Connection". You should see a message appear to confirm that the ping was successful.

At this point you'll be able to see your containers and images in Eclipse's Docker Explorer perspective.

I tried the following:

I am now able to see images and containers listed in the 'Docker Explorer' view of Eclipse.

7
Unable to mount docker folder into host using docker-compose
13
Cannot connect to chocolatey.org or any other internet site from within container
2
Join a Linux Docker swarm with a local Windows Docker for test purposes
1
kubernetes allocating pods with the wrong IP
1
How to create a local network mapping in linux
3
How to create network connection into remote docker stack?
2
Access docker container by host name instead of localhost:port