Last call to make your voice heard! Our 2022 Developer Survey closes in less than a week. Take survey.

How to get rid of develop branch for simplified Git flow

In a continuously developed web project (not a product) we currently have the following branching strategy, roughly based on git flow:

Master is read only, updated via pull requests from develop or hotfix branches. Each update results in a release candidate being built and deployed to the staging system. Release candidates are deployed to production after manual approval.

Feature branches are created based off develop, or from the last commit that has been merged into master. A pull request from a feature branch to develop is built, deployed to a free test system where integration tests and acceptance tests (automatic & manual) are executed. When successfully tested and reviewed, the PR gets merged, so that it will become part of the next release (i.e. merge from develop to master).

I would like to simplify this and get rid of the develop branch. The develop branch has mostly historical reasons and since it is always a successfully tested version, I think it is unnecessary to keep it separated from master. Removing it will also simplify the release process because there is no additional merge anymore.

I have the following constraints:

Where I am not sure about the transition:

IMHO the problems you're facing are just a side effect of the poor branch strategy you started with: you're effectively plowing new development on develop (i.e. what converges towards the future production code) through the current production code on master. This leads to contradicting requirements and problems since typicaly the future code diverges from the current one:

Dropping develop won't help (much) - you're not eliminating the problem, you're just transferring the develop-specific portion of the problem into master.

A better approach would be to move the production behind the current/future development, to prevent interference with development for future releases, as illustrated in this image from What is Your Branching Model?: 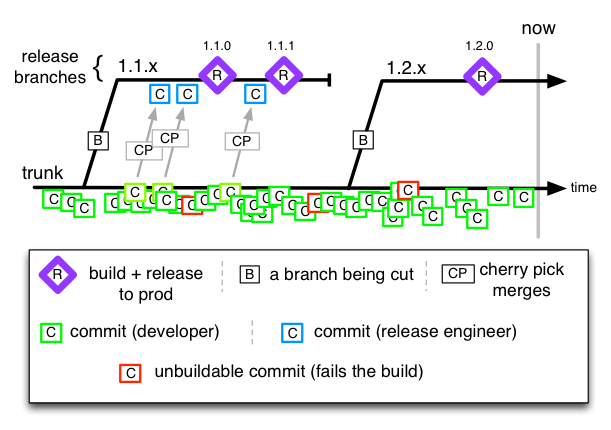 Please note that I'm only referring to the release branches in the above image, not on what's happening in the trunk.

How would this work for you:

Now looking at what goes into master (which is past the point where the current release branch is pulled off), you have 2 options:

If you like this approach here's how you get there from where you are today:

Let's say you take out the master branch (you can rename develop to master to confuse your team if you like later) and simply use tags for releases either on develop or hotfix branches. You took out a branch, but the difference is just a change in syntax. Change for change sake.

Now let's say you actually take out develop with keeping the locked master branch. What will happen is that integration of code will slow, it will live longer separated in feature branches, especially close to release dates. This will Increase the difficulty of merging each time and slow the process down.

Within the constraints you have laid down I don't see any positive effects of making such change. It would require relaxing the constraints, especially the first one.

You are already building and testing code on each of the pull-request and hot-fix branches. This means that in aggregate, the sum of all branches pending on pull-request are your virtual develop branch.

When you create a release from master, you would usually create a tag on that release. Later hotfixes can use that tag to create a new hotfix branch from which a deployment will be made, even though the edge of master is already ahead. On this hotfix branch you would probably also tag a minor release, and make sure that the changes were merged into master.

Removing merged features from a release is quite hard to do with git. The best mechanism for this would be to use git revert on the merge commit. But that makes it almost impossible to get these features/changes back, and history becomes all muddled.

A much better way to handle separation for deployment of code, and release of features, is feature flags. If your developers can hide their features behind some conditions in the code itself, you could deploy their code, but turn off the feature. This is a separate topic, but a lot of information about this exists (including a Q&A on devops.SE).

Well @dan-cornilescu says it well for your particular problem, but the more general case for Trunk-Based Development (mentioned in the Continuous Delivery, Lean Enterprise, and The DevOps Handbook) is made here: https://trunkbaseddevelopment.com/

Not the answer you're looking for? Browse other questions tagged git release-management builds branch or ask your own question.

4
Would choosing the integration branch strategy be part of DevOps?
8
How to create staging servers for multiple git branches?
2
Where should I store my build configuration files?
3
Git - Everyone Pushing to Same Branch in Different Files
4
What's the practice to perform a releasing with Git?
2
Git Release branching strategy for Continuous integration and deployment
0
Should I use release branch to push my changes?
2
Branching model for nightly deploys
1
Git feature branching strategy allows unapproved 'tag along' features
2
Is there a better model for my CI/CD cycle?