AWS Lambda cost is dependent on the time a function runs, and to some extent on memory footprint. Having functions that finish faster, and take up less memory can save quite a lot of money. Especially when such a function is executed often.

How can a Node.js Lambda function be tuned for speed and small memory footprint to save on cost?

Are there other aspects for Lambda that are advantageous to improve?

Dawny33 response is good, but I would start earlier in the development process.

Keeping an eye on your cloud environment to make sure that your functions behaves as you expect (including your "production" functions, which might operate on a different data set) is crucial, because it might reveal things that are impossible to reproduce locally or with a test data-set.

Nonetheless, I would say that this performance testing that you do in an optimization purpose should start straight from the developer's machine. Or, at least, from some local environment before pushing to the cloud.

The reason I say so is that while AWS Lambdas are amazing on many points, the fact that you don't have a full control on the server will limit your instrumentation abilities. I'm not saying instrumentation is impossible when in serverless, but try figuring out how many CPU interrupts you have (and how many are caused by your code) just for fun ;)

So what I advise, and this is actually not limited to serverless, is to start the profiling early. NodeJS profiling can be made with many different tools, NewRelic, dynatrace and AppDynamic are some of the big players. There is also smaller player, some of them are just a NPM package to install (like Nodefly). It is also possible to do some NodeJS without any additional tool, as there is a profiler built into the V8 engine. This documentation from NodeJS will get you started.

Whatever tool you choose, you want to install it locally and collect profiling data. That might involve running an agent or including a package in your package.json. Your tool's instructions will tell you how to install it. A good profiler will let you know how much memory and CPU you use. Better tools will give you insight on how many remote calls were made, how long they took.

Use the profiling data that the tool gives you to identify bottlenecks and address them. There's no limit on how much profiling you can make. Some people (crazy?) will look at the system calls of their most critical function. You might have to do that kind of thing if you want to shave nanoseconds of your function (but then, maybe AWS Lambda isn't the best choice to start with).

It's also worth noting at this point that I haven't mentioned anything specific to AWS Lambda. That's because your optimizations will most likely not be AWS Lambda specific (after all, in serverless you shouldn't be worried about the server/environment).

Make sure that not only your code works, but that it works the way you expect it to. Don't over optimize, but keep a critical eye on CPU and memory usage. Should a 2MB array really grow to 10MB when you sort it? Probably not.

Then you will be able to use tools mentioned by Dawny33, or some other tools, to confirm that your functions perform similarly when deployed to Lambda. You will however already have a very high level of confidence in your function and will only need to validate that they behave properly, not fully profile them.

I might not be able to answer it completely, but here are my views from my limited experience with lambda: 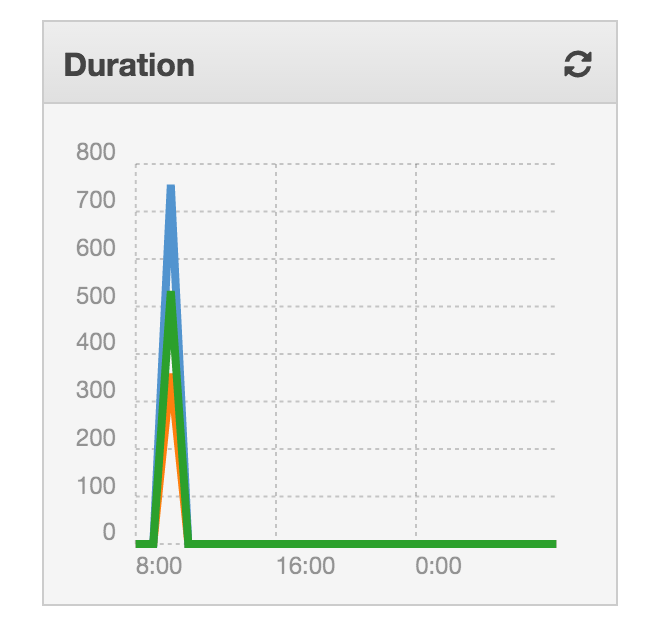 So do throttles/errors/number of invocations.

Check out the IOpipe profiler to get full v8 profiler dumps from Lambda invocations. You can load those into Chrome Devtools to see exactly where CPU time is spent, and how memory is being used for your functions. 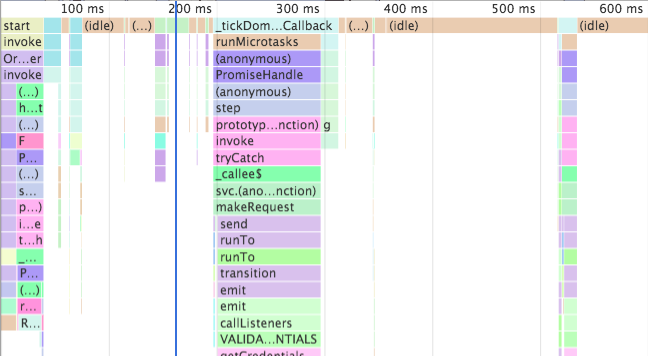 Disclaimer: I work for IOpipe

Use StackImpact agent to get CPU and memory profiles. More details in the blog post: AWS Lambda CPU and Memory Profiling (Node.js). Because Lambda Node.js process is freezing between requests, most of the other tools will probably not work out of the box. 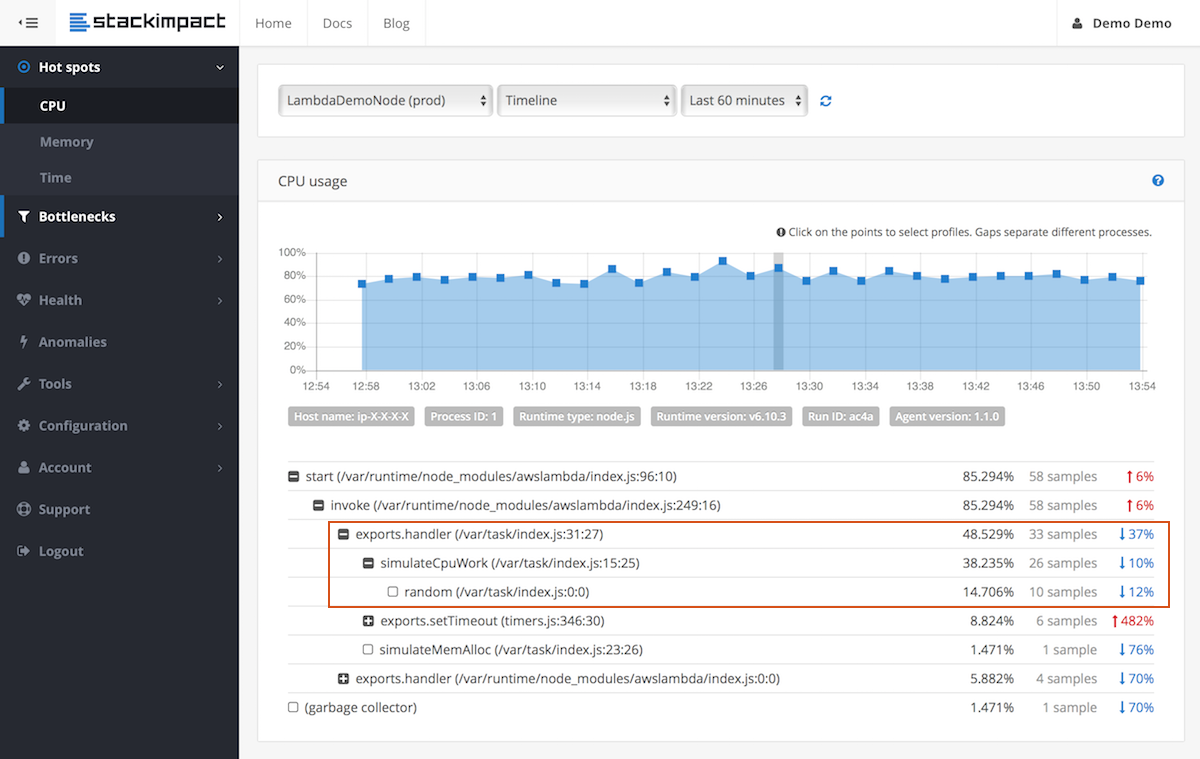 Disclaimer: I work for StackImpact

Not the answer you're looking for? Browse other questions tagged aws-lambda performance or ask your own question.

6
Should performance tests be run using a CI and how often?
11
How do I upload my zipped lambda code into AWS Lambda?
4
Challenges of using AWS Lambda chain
3
How to "inject" AWS Lambda code into a CloudFormation?
3
How granular in purpose should FaaS functions be?
3
Undeploy or deactivate an AWS Lambda
2
Storing my Lambda Functions on GitHub
0
AWS lambda: works locally but fails in deplyment
1
How do I create separate versions of lambda functions through terraform?
0
AWS subnets for lambda synchronous invocations