Three solutions to structure a deployment with Ansible?

I am currently deploying a new product and came across some problems to structure my Playbook and Roles. I have three different solutions and hope to get some input which path might be the best.

The product is a webapp on a windows server. The following steps are needed to deploy (high level):

I use static inventories for prod and staging, group_vars, roles (created with ansible-galaxy) so there is some kind of structure.

Solution 1 Put everything in one huge playbook. That does not sound well, but has the advantage that you know the variables from previous installations e.g. tomcat needs to know where JAVA_HOME is... that was with the javajdk installation, due to more than one java on the machines there is no global JAVA_HOME...

Solution 2 Break all out in small roles. Sounds great but roles should be independent from each other. I did not found a method to decouple tasks. Would it make sense to have single roles for e.g. install_tomcat, config_tomcat and set up a playbook which has the mentioned roles in sequence?

But how does one role know about, e.g. a path name which is needed in the next role. -> Installation sets the path, config needs to know.. I an really unsure to make roles independent.

Solution 3 Kind of solution 2. Have a main playbook which contains only roles, split as much as possible to roles. Have independent variable names in ./roles/vars/main.yml

Somehow(?) find a place higher in the variable precedence with the playbook where all needed var definitions go. Internally either path a variable to the role or simply over-rule a role variable.

I would go with Solution 3 but I have not yet found a way to set that up. What is the experts opinion, is solution 3 doable, is one of the other once better or is there a 4th solution?

I would recommend to structure the code as defined in the Ansible Best Practices document: 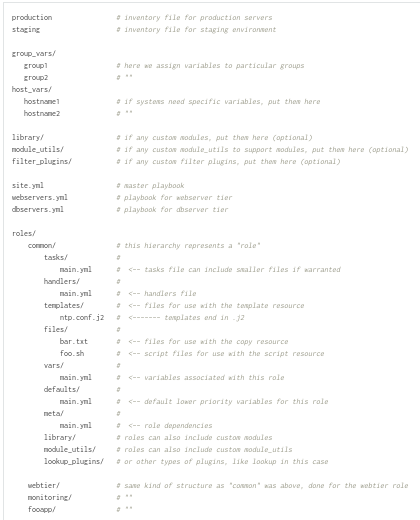 If one will follow a significant different structure then it will be really hard in the future to reuse roles from the ansible galaxy community and one has to reinvent the wheel.

Short Answer: You do programming here. Consider Programming Standards (cleancode) like "package by feature" and build role which are reusable and express the reason of the role. e.g.

Futhermore: The underlying role e.g. the jdk should never know about the tomcat role etc...

Not the answer you're looking for? Browse other questions tagged ansible structure or ask your own question.

9
Playbook without relative path to vars
1
Why to overrule role vars?
3
In ansible how to select specific tasks in a role according to the playbook or a more general parameter?
3
Ansible - Handler not found on first attempt
1
Ansible: Copying different files to different guests for use with the same role
3
Unable to run playbooks using Ansible best practices layout
1
Prevent misspelled variables passed to Ansible roles
1
Ansible: how to display the name of the currently running included_tasks playbook file?
3
Tying playbooks together
0
Installing ingress controller, services and pods on K8s via Ansible