What is the term for a deployment designed to make a future cutover seamless?

I'm currently working on a new major version (v2) of an application meant to replace the current production version (v1). This redesign carries with it changes to the front-end, public API layer, internal API layer, and database — the whole kit and kaboodle. 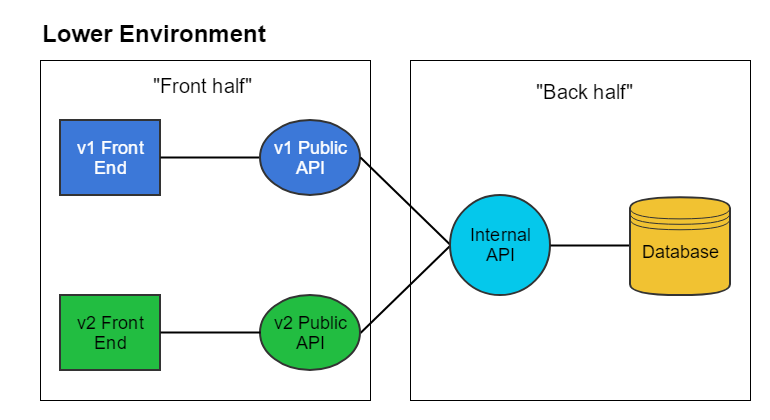 Is there a name for this particular type of deployment, where a shim is deployed to an existing app to make it work with an updated back end, with the goal of making a future cutover seamless?

Taking my definition of blue/green deployment from this informative blog post, I believe this is a distinctly separate kind of deployment.

... by making a minor change in the v1 front half, this breakage can be avoided.

The above excerpt of this queston reminds me of something similar from around the late 90s, say 1996-1999 (when zillions of ITers were preparing for Y2K ...). In those days, new software releases of huge software vendors would come with release notes that included things like either of these:

Y2K tolerant softwares would typically also include some sort of magical cut-off value, e.g.: years from 70 (when even MS DOS did not exist ...) to 99 were assumed to be from 1970 to 1999, while anything from 00 to 69 were assumed to be from 2000 to 2069. Such assumption was also why such softwares were required to be superseeded by some Y2K compliant release later on (in which those assumptions were obsoleted).

With the above in mind, the term you are asking for could be something like a "V2 tolerant release", which at some point in the future would then be followed by a "V2 ready release" (= your actual V2 release).

"Compatibility layer" sounds good to me.

Not the answer you're looking for? Browse other questions tagged deployment terminology release-management or ask your own question.

22
How to get rid of develop branch for simplified Git flow
7
What is the difference between packages and artifacts?
1
Is there a standard way to check if a web API is alive?
8
Encrypting docker images (end to end); transporting over offline channels
4
What's the term for moving/promoting code between deployment environments
5
What is difference between release and deployment?
1
What is the proper term for lead time from commit to deployment?
0
What is the common term for Apache virtual hosts or Nginx block systems?