In Azure Devops and TFS, is it possible to create a build artifact and release definition in a different collection than the original code repository?

I have code repo held in Collection 1 and, using this code repo, I am trying to create a Build artifact and Release definition in a different Collection 2.

Is this even possible?

Since on-premise TFS and the newly renamed Azure DevOps Server 2019 still have the concept of collections, which is the highest level of separation of data you can have (separate physical databases), you'd need to treat a code repo in Collection 1 as an external repository rather than try to discover it as a known internal repository.

You can do this in the Build pipeline of a build in Collection 2 by selecting External Git (if your repo is Git, TFVC is not supported), then clicking Add Connection and entering the Git repository URL and login credentials like in the screenshot below. Once connected, your pipeline, if it produces artifacts, will store them in Collection 2, which can be used for a Release pipeline. 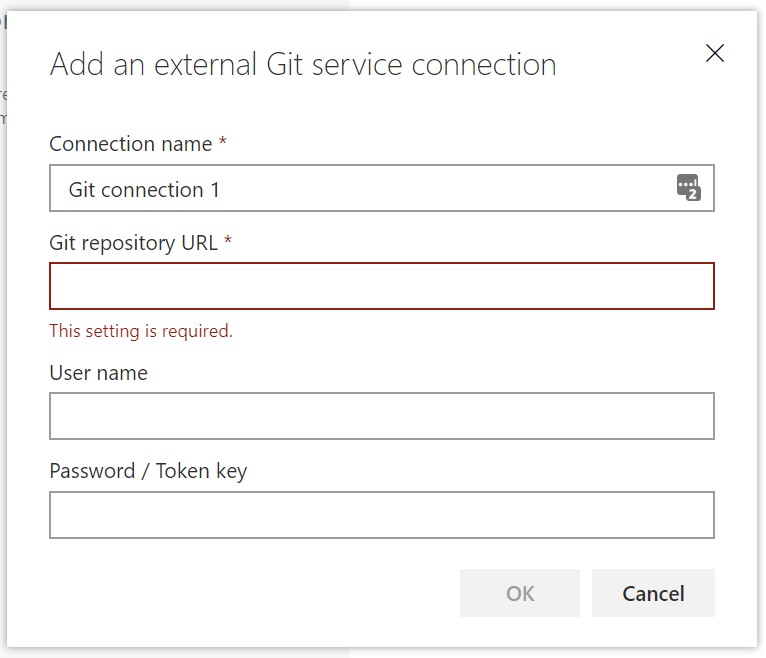 TFS on-premises depends highly on how up-to-date it has been kept. The most recent versions are feature equal or close to it with Azure DevOps and the above should be true. Milage may vary in older versions.

It isn't clear here in your question though what you are trying to achieve or what you've tried so far.

Not the answer you're looking for? Browse other questions tagged continuous-integration azure-devops cicd azure-pipelines tfs or ask your own question.

1
How to setup multiple build environments in Azure DevOps/TFS2018?
4
What is happening in an Azure Devops build and release?
2
How do I get Azure Release Pipelines to move a .jar from a Build Pipeline job and place it on a Linux VM?
2
Azure DevOps Build and Release pipeline artifact name variable
3
How to arrange builds for staging and production with Azure DevOps?
0
How to handle resource creation?
1
Azure DevOps: How to pass a parameter from a build to a release?
1
How to skip Build without creating Drop and not triggering Release in Azure DevOps