Who is this Chaos Monkey and why did he crash my server?

I had a perfect server, it was so pretty and rock solid and so I named it Petra. It was perfect in every way, everything was configured and tuned just right, it had perfect 100% service record and 753 days of uptime. I've spent a lot of time and effort making sure it run so well. No other server in the company had been this good. But last night this evil monster crashed my server for no reason. 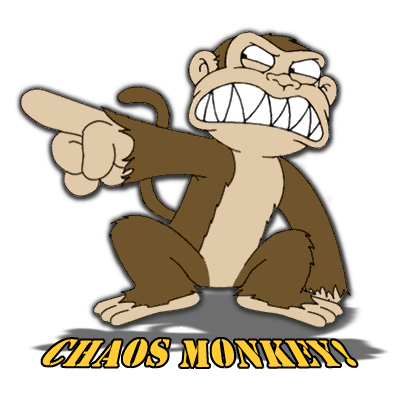 Of course I was notified at 2am and it took me until morning to get it up and running and everything configured and tuned up, but I'm afraid it is not going to be as good as before. It might take weeks before it is back to it's former glory. Now my uptime is gone, I don't have even measly three 9s and who knows what this will do to my reputation. Who is this Chaos Monkey and why did he do that to my server and why is he trying to ruin me?

TL;DR: Chaos Monkey was developed in 2010 at Netflix and released into wild in 2012 is part of the Simian Army, wildly popular among devoted followers. Built on principles of chaos engineering, the army increases resiliency to failure by injecting constant failure to the system.

Chaos Monkey was developed specifically for AWS where it will randomly kill instances within an Auto Scaling Group. It is meant to run during the business hours when engineers are alert and can quickly react to discovered failures.

Members of the army would sow chaos through other means:

Other Monkeys are helpful and remove the weak members of the herd:

Failure in the System is inevitable, something will always go wrong. You might not be able to choose what, but you can try to choose when. By introducing small errors throughout the day, you ensure that your engineers are present. By killing non-conforming services quickly, you ensure that failures happen often before deployment. By making the environment more adversarial, you ensure that it will be the developers who run into issues long before any service makes its way into production. Failures will be quickly apparent in integration phase of new services with the old ones, but that is ok, because the old production services are already resilient.

Everyone will tell you lately: Do not treat your servers as pets. There is a power in numbers and any single point of failure will bring down the system. No matter how well you can tune and optimize your server, no matter how beefy hardware you can get, how much it can handle, it will never be a match for herd of small scalable instances. Chaos Monkey encourages you to think about removing all points of failure, because sooner or later, the Monkey will come! Everyone fails and even the Amazon S3 had an unpredictable outage.

So what is the theory and why does it work? Nassim Nicholas Taleb in his book Antifragile describes a concept where living self-aware systems, will benefit from a small levels of randomness and actually become better in face of adversity. This is similar to annealing.

He does also describe an evolutionary way, where fragility of parts in a system is transferring into antifragility of the whole. The transfer occurs on two levels:

Larger levels of randomness can be withstood using the second approach.

Some additions to your own answer to this question ...

The article about "How chaos boosts performance" describes a few more of these monkeys, i.e.:

Remark: The same article also mentions "Chaos Gorilla: simulates an outage of an Amazon availability zone", though it could well be that this has been renamed now to "Chaos Kong: simulates an outage of an Amazon region" ... Talking about Chaos! I couldn't find any confirmation/docu on that so far, at least there does not seem to be an issue for it in the issue queue. An undocumented change might have made it to production on github ... Gggggggrrrrrreat!

Setup and use your own Monkeys.

Head over to github to get in touch with the Simian Army (same link as the very first link in your own answer). Here is a quote of what you'll find there:

Simian Army consists of services (Monkeys) in the cloud for generating various kinds of failures, detecting abnormal conditions, and testing our ability to survive them. The goal is to keep our cloud safe, secure, and highly available. More details can be found at this blog.

Refer to the Quick start guide to get started setting up and using the Monkeys.

You can even configure the monkyes, so that they fit your business needs.

If you dig deep enough within those Github links (i.e within the Support link), you'll also find a link to join the SimianArmy Google Group.

You, Sauron, forged this One Server, in the Darkness of Mount Doom your Datacenter in a desire to rule All applications.
Hopefully the Fellowship of Devops did unite to tell you: 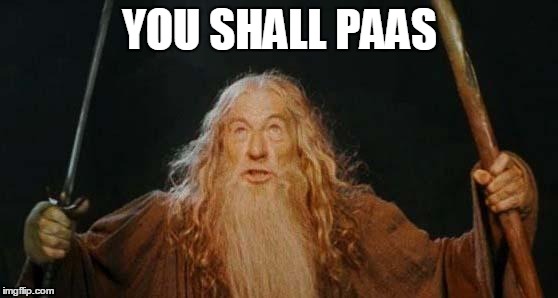 After a long fight, Frodo the Chaos Monkey has been able to melt your One Server and bring freedom to all applications, driving you to the way of reproducible Servers at the same time.

Not the answer you're looking for? Browse other questions tagged amazon-web-services process automation servers sysadmin or ask your own question.

6
How to improve DRP-testing of SE sites?
3
How can I simulate failure of an AWS Availability Zone?

1
When setting up Foreman should this be setup on the same server as my puppet ro ansible master?
11
How to support releasing new versions of the code, running in parallel with the last stable release?
0
Communication between VPCs and a transit VPC hosting VPN Server without Masking source IP
0
Is it true to say that both a "shared server environment " and a "VPS environment" can be either IaaS or PaaS?
7
Who should write Docker files?