Organizing the build steps on AzureDevOps

I am new on DevOps world and I am making my first build/release pipeline for a .net web application using Azure DevOps. On the picture bellow, I just add some build steps and create some tasks groups to avoid duplications on the builds (that are similar). I have the Run on agent that I called it as Qa Agent Job which runs over the local build agent hosted on my build server (as a windows service).

My question is related with organization. I have some build steps here and I would like to organize it by sessions, for sample, Nuget Restore, Versioning, Build, Testing, Building services, Publishing artifacts etc. Is that a problem to organize it using the Run on agent item on build step? Should I lost any performance like "connecting on the server again" or "start a new process" or something like that? 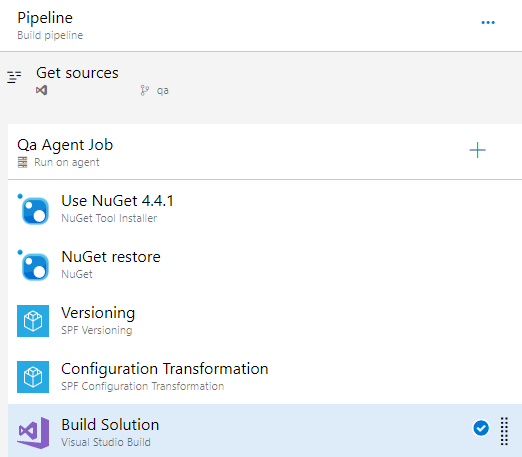 You can separate the steps, especially as it would let you do divide the work among different agents. You can also leave them in a single agent if you wish.

The primary advantage I see is leveraging different pools for different sets of work.

With releases last I checked variable scope was limited (as of 2018) to the "phase".

I wouldn't necessarily worry about performance due to connections unless you've observed this issue and have more specific detail you can add.

6
Continuous Integraton using Jenkins Pipeline for a .NET project
1
Problem Restore EF Core 2.1.1 in VSTS, Hosted VS2017
2
Azure Devops: Filter Test Projects in Nuget Build Pipeline
1
How trigger a build by a commit in a branch prefix?
4
Project pipeline not able to access NuGet package from Artifact Feed in different Project
2
How to setup priorities between pipelines that might be triggered simultaneously on Azure DevOps pipelines
1
Azure DevOps: How to pass a parameter from a build to a release?
1
Deployment Error: getaddrinfo ENOTFOUND <appServiceName>.scm.<appServiceEnvironment>.appserviceenvironment.net
0
Missing Red Hat agent specification in Agent Specification drop down in building Azure Pipeline