How trigger a build by a commit in a branch prefix?

On the Azure DevOps, in we git we have a schema of branches where we create a branch per sprint, for sample:

We keep the 3 last sprint branches, and in this case when I create the sprint4 branch, we will drop the sprint01. Each sprint We publish a version of our product every week. On the build pipeline definition on our project, we have defined the trigger to run over a push on the sprint* branch because we don't want to change the definition on each new version.

It works but it runs a build for each sprint branch and a release for each one. I would like to have just for that branch (with prefix sprint) that was pushed on the git. Is there any way to configure it? 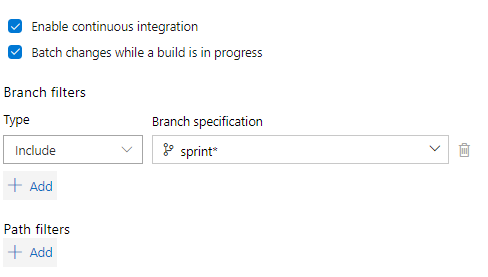 It's recommended that you use a convention of prefixing your grouped references (like branches) with "folder" prefixes.

For example, when you create sprint branches, create them with the names:

Then, configure your build trigger Include filters with this prefix:

... and then an Exclude filter for master, since by default it is also included.

Once configured, this should build only the sprint branch (topic branch) that was committed to.

Not the answer you're looking for? Browse other questions tagged azure-devops build-pipeline release or ask your own question.

2
Where should I store my build configuration files?
0
How to get Github username variable in Azure DevOps build pipeline?
1
Pushing code changes from Pipeline back to repo/branch, using Git!
3
Trunk Based Development - release branch testing
1
Azure devops, fortnightly build trigger
5
How to properly setup a multi-environment release pipeline in Azure YAML pipelines?
1
How to skip Build without creating Drop and not triggering Release in Azure DevOps