I am very new to ansible and I think I am lacking something basic that I am not finding in the examples or on github as to the directory structure and its use.

But the documentation is not clear on how the structure should be used in practice. I have multiple clients in which the inventories must be kept seperate. My directory structure is set up as follows:

The hosts files contain routers, switches and firewalls (grouped as such) like this:

The group_vars have router, switch and firewall files with the appropriate variables. There is a credentials.yml in the ./inventory/client name/group_vars directory that is encrypted and should be loaded for every playbook. I understand precedence and I am not having any trouble there.

If I run ansible-playbook in the correct inventory folder (./inventory/client1/) I can pick the host, but how do I point to the playbooks that are in the root folder without backing up directories each time like this:

It seems poor form to have to back out of the directory each time just to run a playbook. If I just put the playbook name, it does not find it so I am thinking that it was not the intention to run ansible-playbook in this way either.

How can I load additional credentials files or group variables? It would be nice if there was a way to pull this from the directory that contains the inventory but I can't figure that out. I was thinking of possibly loading extra_vars in the playbook and setting a value for a variable called "client" in the "all" file, but it seems kludgy and prone to error. I was hoping that there was some type of automatic pull that can be done like the loading of the group_vars and host_vars but maybe I am missing something.

My thought is that since the inventory layout is shown as Ansible best practices, then maybe I am not fully understanding of how I should be running playbooks.

It would seem to me that I should be able to run ansible-playbook in the root directory that contains all my plays and point it to an inventory file easily. The playbooks should be reusable across all clients with no changes required and there should be an easy way to load variable files without having to specify them each time at the command line. Ansible already does this very well with group_vars and host_vars so I am thinking that I am just missing something simple.

This run a configuration playbook that runs a task that builds a VPN. This VPN is built for a client called atcog. I have to add this very long --extra-vars @inventory/atcog/group_vars/credentials.yml to access the credentials file for the client "atcog". I also have to manually modify the playbook to have it only run the play on a single host by adding - hosts: atcogfirewall-1. It seems like there should be a better way.

So let's say I now want to push this VPN to another client. I now have to edit the playbook and change - hosts: krifirewall-6, then I need to send this command to make sure the right credential file is used: ansible-playbook -i inventory/kri ecats_l2l.yml --extra-vars @inventory/kri/group_vars/credentials.yml

Seems like a lot of places where a typo or forgetting to update a playbook host entry can cause this to run on the wrong device or run with the wrong credentials.

So if I add something like extra_vars=~/inventory/{{ client }}/credentials.yml in the playbook I can likely mitigate the need to put the --extra-vars in the command line but I can't figure out a way to resolve the whole choosing the individual host issue without manually updating the playbook each time which is just asking for human error.

Here is a screenshot of the layout. The playbook I am running is in the root directory but is not shown as I could not capture it all on 1 screen. 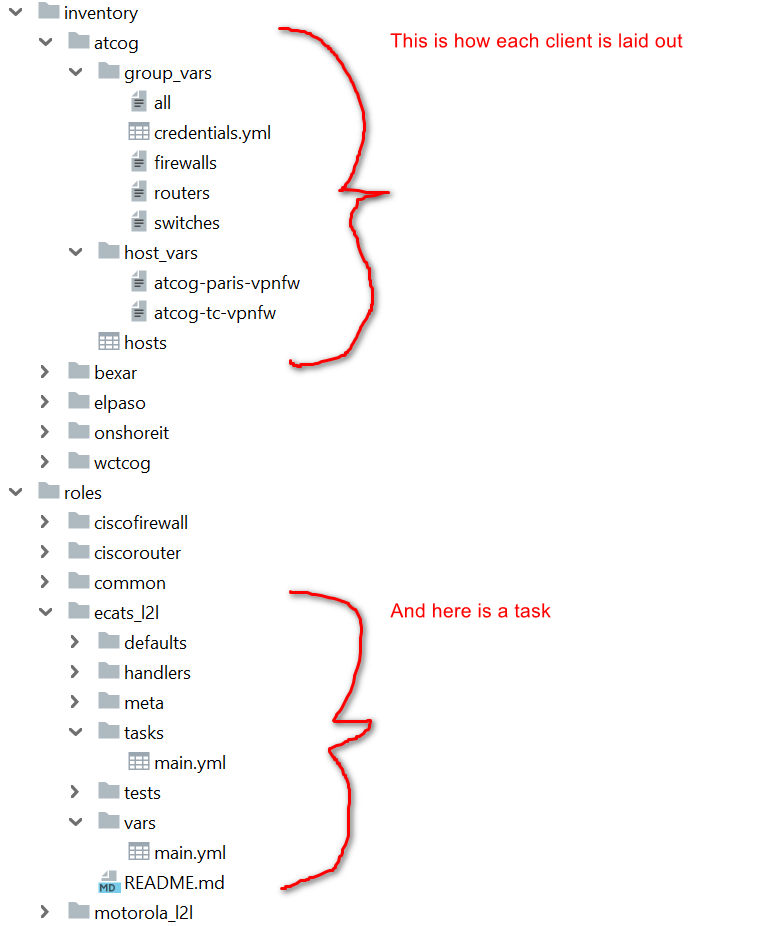 Generally, Ansible is very flexible and often there are more "correct" solutions.

Start for example with the question "Where do the configuration data come from?", put the default data to the roles and decide which variables should be configured in "group_vars/host_vars", in the roles, and which in the playbooks. Review Variable precedence: Where should I put a variable?. To set paths to the inventory, roles, and others see Ansible Configuration Settings.

To answer your questions:

To pick for example "router1" start a play with:

Q2: How do I point to the playbooks that are in the root folder without backing up directories each time like this: "ansible-playbook -i hosttarget ../../myplaybook.yml"

Q3: How can I load additional credentials files or group variables?

There are a lot of options described in Variable precedence: Where should I put a variable?. For example "include_vars" might be useful to load additional credentials. For "group variables" pick from the options.

Not the answer you're looking for? Browse other questions tagged ansible yaml ansible-inventory or ask your own question.

17
What is Ansible's config equivalent of `--vault-password-file`?
5
Running Ansible no-op's faster with a dynamic inventory and cached facts files
9
Playbook without relative path to vars
5
Discovering extra args needed for running ansible playbooks
13
How do I run Ansible Azure playbooks while avoiding storing credentials in files?
0
Should local Ansible playbooks be loaded each day/week with cron?
3
How to have Ansible move a microservice?
3
Tying playbooks together
0
How are ansible playbooks supposed to be imported into a collection?
1
Ansible dynamic inventory using AWS plugin -- how to obtain internal DNS records or private IP?