We're just starting to push for CI-CD and as a baby step we're going to try updating a stack with the latest green develop once every couple of hours. I am fairly new to Git/Bitbucket, and can't figure out how to ensure the checkout that Jenkins makes gets the last commit to have been marked green by Jenkins, rather than just "the last commit" as a blanket statement.

We have the Bitbucket Build Status Notifier plugin installed, so Bitbucket does track which commits are green after our unit tests run. Is there a way to leverage this info to make sure the right commit is picked?

You don't make any mention of the scripting language you want to use, so I will talk specifically about the HTTP requests to the BitBucket API:

If you have a BitBucket Repository that has three commits in in it the first and the last are failing the build, the middle is passing:

You can get the list of commits by calling the following API method:

If you parse the JSON and loop over the responses you can extract out the statuses from:

Where n is the index, i.e. 0, 1 or 2 in the above example. If you were to construct this from scratch it would be in the following format.

Note: this is a Hypermedia API which means the urls could change so I would recommend using the links from the previous response rather than trying to generate them from scratch.

The response from the above HTTP request will be something like:

From this response you can extract the state using:

Again where n is the status - there could be many of them if one commit resulted in many builds.

If the state for the build you care about is SUCCESSFUL then you have your answer and you can immediately return the sha for the commit.

Loop over all of the commits from the first phase, if you run out of commits follow the next page link that is included in the call to /commits.

At a high level the flow will look like this: 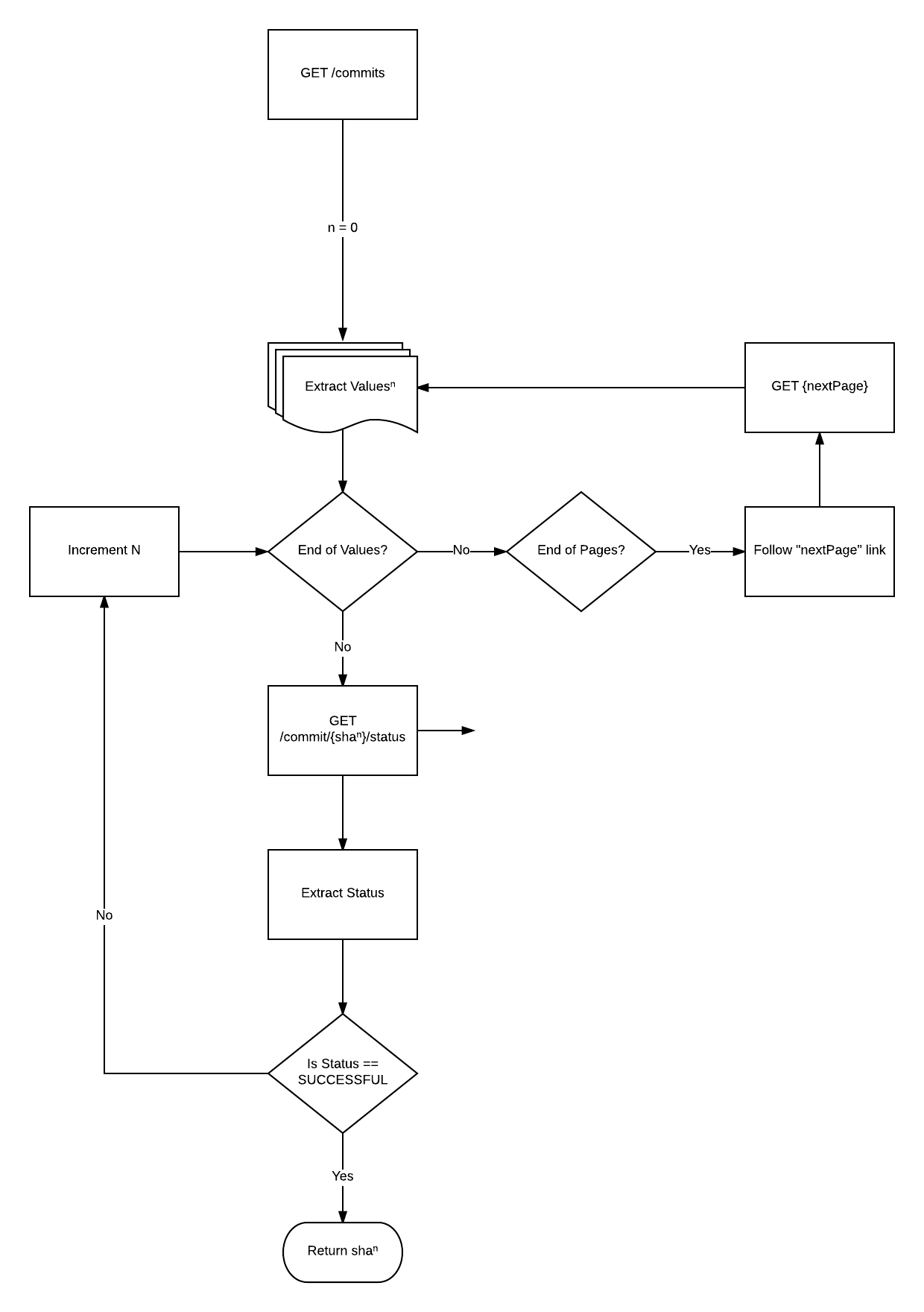 Don't forget this is a Hypermedia API so wherever possible have your code follow the links in the API rather than trying to "guess them".

In a typical Continuous Delivery/Deployment pipeline you would have the following happen:

The goal is to avoid building the solution from source twice, you build it once and deploy it many times. You can implement approvals in Sonartype Nexus to define the environment approval process, i.e. Dev → Test → UAT → Stage → Production.

That said... if you have read all of the previous and still want to get the latest green build from source control then you can use one of two techniques:

Feel free to post a follow-up question if you would like the specific detail on how to use the above approaches.

Not the answer you're looking for? Browse other questions tagged jenkins git bitbucket bcbsn or ask your own question.

22
How to get rid of develop branch for simplified Git flow
5
Jenkins Pipeline downstream job; exit unless it hasn't run in the last x hours
8
Jenkins Pipeline and stash Pull Request Builder not working on PR create/update
2
Jenkins API call (or Groovy builtin) that returns list of all currently running builds of jobs
5
Why does the Jenkins bitbucket-build-status-notifier-plugin post the status to the shared pipeline library repository?
7
Jenkins & Bitbucket; cancel previous build if new commit made to same branch?
1
How to trigger Jenkins Pipeline by push in specific branch in Bitbucket?
4
JenkinsFile to get git branch name
0
Jenkins Not pulling the latest commit into master or slave
0
How to get branch hash using git command