I'm tasked with setting up CI/CD for my company. I'm using TeamCity which I have configured using the Octopus Deploy plugin to create a Nuget package to the appropriate dev server (alternatively, I can have TeamCity spit out a .zip).

The package itself is a solution that contains several projects, and each project needs to be deployed to different folders on IIS. Is this something that I can accomplish with Octopus Deploy, and if so how?

I've looked through the documentation and spent a lot of time Googling but I haven't found an example of someone doing this but I want to use Octopush Deploy because of the reporting and flexibility it provides (since I will need to set up pipelines to other environments in the future).

The solution is currently deployed on ISS like this: 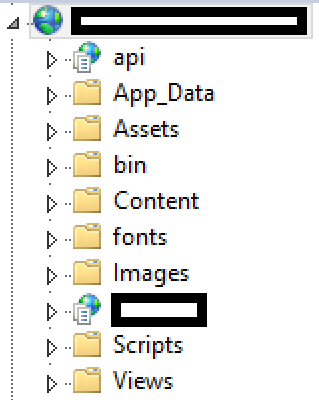 Any assistance provided or links to resources is deeply appreciated.

continuous-deployment teamcity octopus-deploy
Share
Improve this question
edited May 5 at 19:25

It can be achieved, however, you will make your life easier if you modify your TeamCity build process to create a package for each IIS Website then deploy each one individually using a Deploy to IIS step.

If it's impossible to change your build process then you will need to do some pre-processing or just deploy the websites through a custom script.

I managed to resolve this by installing the Nuget package Octopack on the projects that I wanted to be deployed as either separate websites or website applications.

In this context, I installed Octopack to the 3 projects in green squares and checked-in the changes. Then on the Octopus Deploy side, I created 3 separate IIS deploy steps and just followed the typical steps. Octopus deploy now receives a NuGet package from TeamCity using the Octopus deploy plugin, Octopack build step, from there Octopus deploy has 3 IIS deploy steps, one for the main website and 2 for the website applications, each was given a custom directory path but after I had installed the Octopack NuGet packages into the appropriate projects in the solution through Visual Studio it was smooth sailing just using the general user-guide and tutorial videos.

@richard slater - Thank-you for letting me know about Octopack and nuspec, these were some of the key missing pieces that I needed.

Not the answer you're looking for? Browse other questions tagged continuous-deployment teamcity octopus-deploy or ask your own question.